As part of the seminar "Configurations of economic Action in German-Mexican Comparison", which took place virtually in the winter semester 2022/2023 together with students from the Universidad Autónoma Metropolitana (UAM) in Mexico City, a study trip to Mexico was conducted from January 13 to 23, 2023. 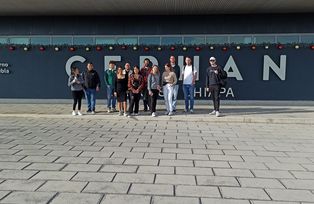 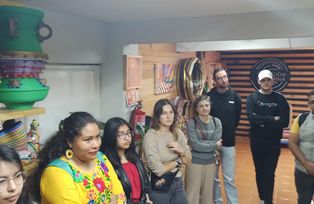 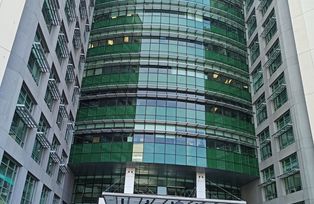 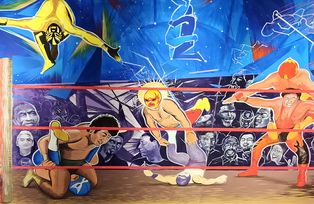 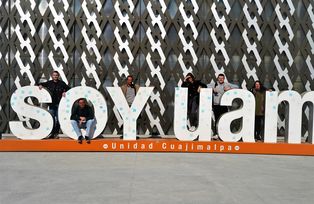 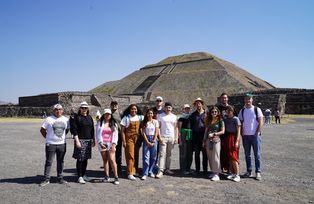 Together with fellow students from the Mexican university, students from the Chair of Intercultural Communication, under the guidance of Dr. Martina Maletzky de García (University of Passau) and Bruno Gandlgruber (UAM, Mexico), got to know different forms of economies and worked out German-Mexican similarities and differences in the context of small-scale field research in Mexico. The programme included small joint seminar units and field research,  a visit to the Audi training centre in the state of Puebla, where the German dual training system was introduced, a visit to the city "Ciudad Modelo" designed by Audi, also an ethnography at a traditional market and a visit to the German-CAMEXA. In addition, the owners of a well-known Mexican design studio (Collección Serpentina) provided insights into the ups and downs of their business. An entertaining leisure programme also gave insights into everyday Mexican culture. This included a salsa dance class, a visit to the pyramids of Teotihuacan as well as the famous "Lucha Libre", a Mexican show fight, which, next to football, is one of the most popular sports among Mexicans.
German and Mexican students agreed: the best way to grasp culture is through direct face-to-face contact.

The study trip was subsidized by PROMOS. The seminar in which the study trip took place is part of the format "Digital Interculturality", which is funded by the Teaching Innovation Pool.

On the occasion of the 60th anniversary of the Élysée Treaty, Professor Christoph Barmeyer, together with Professor Daniel Göler and Veronique Coiffet, participated in a panel discussion organized and moderated by Professor Marina Hertrampf on January 23, 2023. The Élysée Treaty, the "Treaty of the Federal Republic of Germany and the French Republic on Franco-German Cooperation," signed by President Charles de Gaulle and Chancellor Konrad Adenauer in 1962 and entered into force in 1963, was a milestone in international understanding after centuries of Franco-German wars. It established numerous consultations in foreign, security, youth and cultural policy and led to many important achievements that furthered European integration, such as student exchanges, town twinning, the Franco-German Youth Office, the Franco-German Institute in Ludwigsburg and also later the Franco-German Brigade with the Eurocorps or the Franco-German University. In the well-attended panel discussion, which took place in the evening in the library lounge of the University of Passau, it also became clear that the German-French relations need new impulses and projects not only on the political side, but also on the civil society and economic side, in order to continue the German-French and European success story.